A well-respected figure in the hospitality industry, Kamonwan Wipulakorn started her career in finance and is now a prominent leader in the Southeast Asian hotel and tourism industry. Notably, she is also one of the few female executives in this male-dominated field.

Although she has a long list of accomplishments under her belt, she is most well-known for her former position as the president and director of Erawan Group. Erawan is Thailand’s leading hotel investment company with a diversified hotel portfolio across Southeast Asia. Kamonwan was also included in Prospects Top 10 Women in Entrepreneurs in Southeast Asia.

In October 2021, she was appointed Managing Director of Bound and Beyond Public Company Limited (BEYOND). She is also Vision CEO of business investor One Origin and an independent director of Star Petroleum Refining Public Limited, a leading producer of petroleum products in Thailand.

She graduated with a bachelor’s degree from Chulalongkorn University in Thailand and obtained her MBA from Western Illinois University in the USA. Even after these accomplishments, she didn’t stop learning and continued to pursue self-development. She also attended the Certificate Harvard Executive Program in Harvard Business School and the Certificate Stanford Executive Program at Stanford University. Her impressive educational background is a testament to her dedication to continuous learning and improvement.

Kamonwan started her professional career as an associate at a brokerage firm more than thirty years ago and has worked her way up ever since. “I’ve worked in the financial field for 15 years, mainly in investment advisory,” Kamonwan said in an interview with the Bangkok Post. “I left the banks in 2002 to become the chief financial officer of my client’s petrochemical company for five years. But I always had an interest in the hotel business.”

Kamonwan joined Erawan in 2008 when she heard about the vacant position of Chief Financial Officer in the hospitality company. After she entered, she continued climbing the corporate ladder. In 2011, she became president and director of the group and joined senior management in 2013.

Kamonwan calls her management style adaptable and always tailored to the situation she faces. She left Erawan in 2018 and continued to hold director-level positions in other companies. Her current positions are Director of Origin Property PLC, Board Member of Padaeng Industry PCL, and Managing Director of BEYOND.

While she was with Erawan, she was essential in driving the group forward and spearheading its expansion in Southeast Asia. She oversaw more than 7,000 hotel rooms and 6,000 workers in Thailand and the Philippines during her time as president of Erawan.

She expounded on how she works with people around and under her management. “My style is very flexible. It’s my job is lead my team to achieve the result we want, so I can be direct and diplomatic at the same time. My other important responsibility is to build my team to succeed me, so coaching and empathy are essential in my routine,” Kamonwan shared.

A goal of learning every day

Her life philosophy of learning and re-learning for self-improvement is reflected in both her personal and professional life. She lives with the goal of learning every day because the hotel industry and the world around her are constantly changing. The only way to keep up is to be open to learning. She believes that the best way to work with uncertainty is to keep learning. Kamonwan also wants others to have this mindset, and she focused much of her attention on staff development.

Another one of her key goals with Erawan was to create and implement sustainable practices throughout its operations. She wanted to develop a sustainable platform for the group to carry it well into the future. The group also gives back to local communities and is mindful that each property should benefit the local community. From hotel construction to operations, the group made sure that locals would gain income from the project. Locals were employed from the hotels’ building phase, and some were employed by the hotels when they were operational.

A product of Thailand’s openness to female leadership

Kamonwan has also shared her experience being a top Thai executive and if being a woman affected her career path in any way. “I’ve never felt that there were barriers for women getting into leadership roles in Thailand, but I do see it is an issue elsewhere. In Thailand in general, you see more and more women given the opportunity to run organizations. We have a very open work culture and are probably in the top 10 countries in the world for the number of women in leadership roles,” she said.

It’s important to note that Thailand is one of the leaders globally that accepts and supports women in leadership roles. According to studies, women hold 37% percent of leadership roles in the country, compared to 24% globally. In terms of education, it ranks first in the world of enrollment of women in higher education. For every man enrolled in university, 1.41 women are enrolled as well.

The world can learn from Thailand’s attitude towards women leading companies and in other leadership positions. Kamonwan explained how the decision-making process works in Thai corporations. “We see diversity at all levels. But in other aspects, we welcome comments from everyone. We don’t do top-down decision-making. Everyone in the company drives the business. Every decision or project, it comes from a team, not from one person. The way we make decisions comes from the different opinions in the team, and it is always cross-functional, and everyone has the same chance to get their views across,” she said in an interview in 2019.

“This approach is quite common, especially among the big corporations in Thailand. That’s why they become so big; I believe that if the organization does not embrace diversity, it is difficult to grow. For family businesses that haven’t yet transformed into that corporate environment, it may be different. There is perhaps not so much diversity there,” Kamonwan explained.

Aside from gender diversity, Thai companies value inclusiveness as well. Kamonwan emphasized that it’s more about respecting everyone’s opinion than seeing decision-making as solely coming from management. She has also imbibed this in her own management style and empowers the people around her. For example, when she was working in Erawan, they conducted town hall meetings to encourage employees to give their feedback and comments to management.

Kamonwan is a woman everyone can look up to and should admire. From finance to hospitality, and from an entry-level position to CEO, she made her way to the top through hard work and an open leadership style. Even if she’s leading top corporations, she also makes time for her family. She enjoys traveling with them around Thailand and other countries.

Openness, continuous learning, self-improvement, and flexibility are recurring themes in Kamonwan’s life. Because of these admirable traits, she has led teams of thousands of people to success and continues to be a prominent figure in the hospitality industry. She has made it to the top through the combination of all these traits. “All people make mistakes, but we should not repeat our mistakes. Life should be a process of improvement,” Kamonwan mused. Indeed, these are wonderful words of wisdom from a great leader showing the world how life should be done. 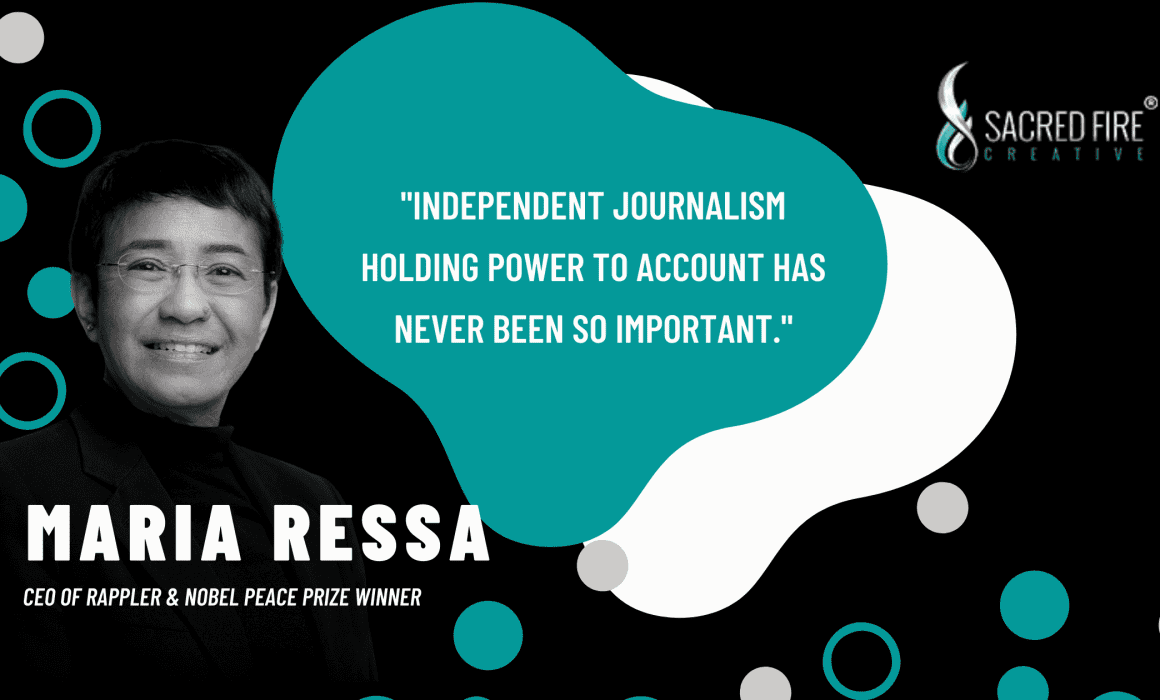 When Rodrigo Duterte became president of the Philippines in 2016, he waged a violent war on drugs that instantly caused deep divisions in the country. Some people agreed with his tactics, while many others considered his so-called war inhumane and unjust. Rappler, a leading digital-only news site led by Maria Ressa, was among those who reported about and spoke out against this drug war.

Who Is Maria Ressa?

Filipino-American journalist Maria Ressa is the CEO and co-founder of Rappler. A long-time journalist, she was CNN’s bureau chief in Manila and then in Jakarta for more than a decade. She also held the position of senior vice-president of ABS-CBN’s multimedia news operations. Before Duterte orchestrated its shutdown, ABS-CBN was the largest news organization in the Philippines.

After working for CNN and ABS-CBN, Maria co-founded Rappler in 2012. Since then, Rappler has built a reputation for leading the fight for press freedom in the Philippines, with Maria at its helm. Because of Rappler’s criticism of the Duterte government, Maria has been arrested and charged with several crimes, including cyber-libel. This cyber-libel case and how Maria fought against it caught the attention of the world.

As Maria continues to spotlight press freedom and how the Philippine government tries to curtail it, her list of accolades continues to grow. She was Time’s Person of the Year in 2018. In 2019, BBC included her in its list of 100 most inspiring and influential women of that year. She also made the 2020 Bloomberg 50 list. And she was the subject of the 2020 Sundance Film Festival documentary, “A Thousand Cuts.”

In 2021, Maria was one of two journalists awarded the Nobel Peace Prize. The other journalist awarded is Dmitry Muratov of Russia. Maria is the first Filipino to win this acclaimed honor. It was given in recognition of her “efforts to safeguard freedom of expression, which is a precondition for democracy and lasting peace.” The last time a journalist received a Nobel Peace Prize was in 1935.

Even today, Maria faces criminal charges in the Philippines. In June 2020, the Philippine courts found her guilty of the cyber-libel charge. However, the country passed its cyber-libel law long after Rappler published the article in question. She still has several tax and securities cases pending in local courts.

“I hope today’s Nobel Peace Prize 2021 award will remind the authorities in the Philippines, Russia, and around the world of the need to respect journalists and journalism. Independent journalism holding power to account has never been so important,” Maria said.

Recently, the Philippine Court of Appeals has granted Maria overseas travel after subjecting her to hold orders for the last couple of years. She will be delivering a series of lectures at the Harvard Kennedy School in Boston. However, she will return to Manila in December. To attend the awarding in Oslo, Maria would need to file new travel requests before the courts handling her seven pending cases.

As one of the newest Nobel Peace Prize laureates, Maria continues to inspire people around the world. Whether you see her as a journalist, a woman, or an Asian, her story is worth commending. How she fights for the truth and stands up to injustice demonstrates her strong character, worthy of our admiration.